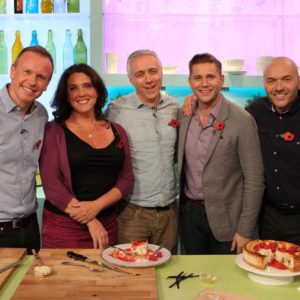 Talked with Tim Lovejoy and Simon Rimmer about the 12 November landing of ESA’s Philae probe on Comet 67P/Churyumov–Gerasimenko, and the key role of comets in delivering to Earth the water that fills our oceans and the biomolecules essential for life. It was also great to meet TV historian Bettany Hughes – just back from Azerbaijan, where she told me her film crew had accidentally taken the wrong road and been shot at! – and actor Allen Leech of Downton Abbey. Leech is in a new film, The Imitation Game, about Alan Turing, the British mathematician who helped to break the German Enigma and Fish codes and shorten the Second World War by 2 years, and was then treated appallingly for being homosexual. Oh, and I got to taste Simon’s delicious lamb curry and cookie dough cheesecake!