Breakthrough tells spectacular stories of scientific discovery, from gravitational waves to antimatter, from the Higgs boson to black holes.

It is not easy to convey, unless one has experienced it, the dramatic feeling of sudden enlightenment that floods the mind when the right idea clicks into place. One could kick oneself for not having the idea earlier, it now seems so obvious.
Francis Crick, discoverer of DNA.

* An astronomer with a quill pen at a desk in Paris calculates the location of a previously unsuspected planet and, weeks later, Neptune swims into view in a telescope in Berlin.

* A soldier dying of an agonising skin disease in a World War I field hospital predicts the existence of a nightmare astronomical object and, 55 years later it is discovered by a man who celebrates by buying his children Knickerbocker Glories in a Hastings beachfront café.

* A physicist recovering from a hellish camping trip in the wettest location in the Scottish Highlands predicts the existence of an unsuspected subatomic particle and, half a century later, at a cost of 5 billion euros, the Higgs boson appears at the Large Hadron Collider.

Infinity in the Palm of Your Hand 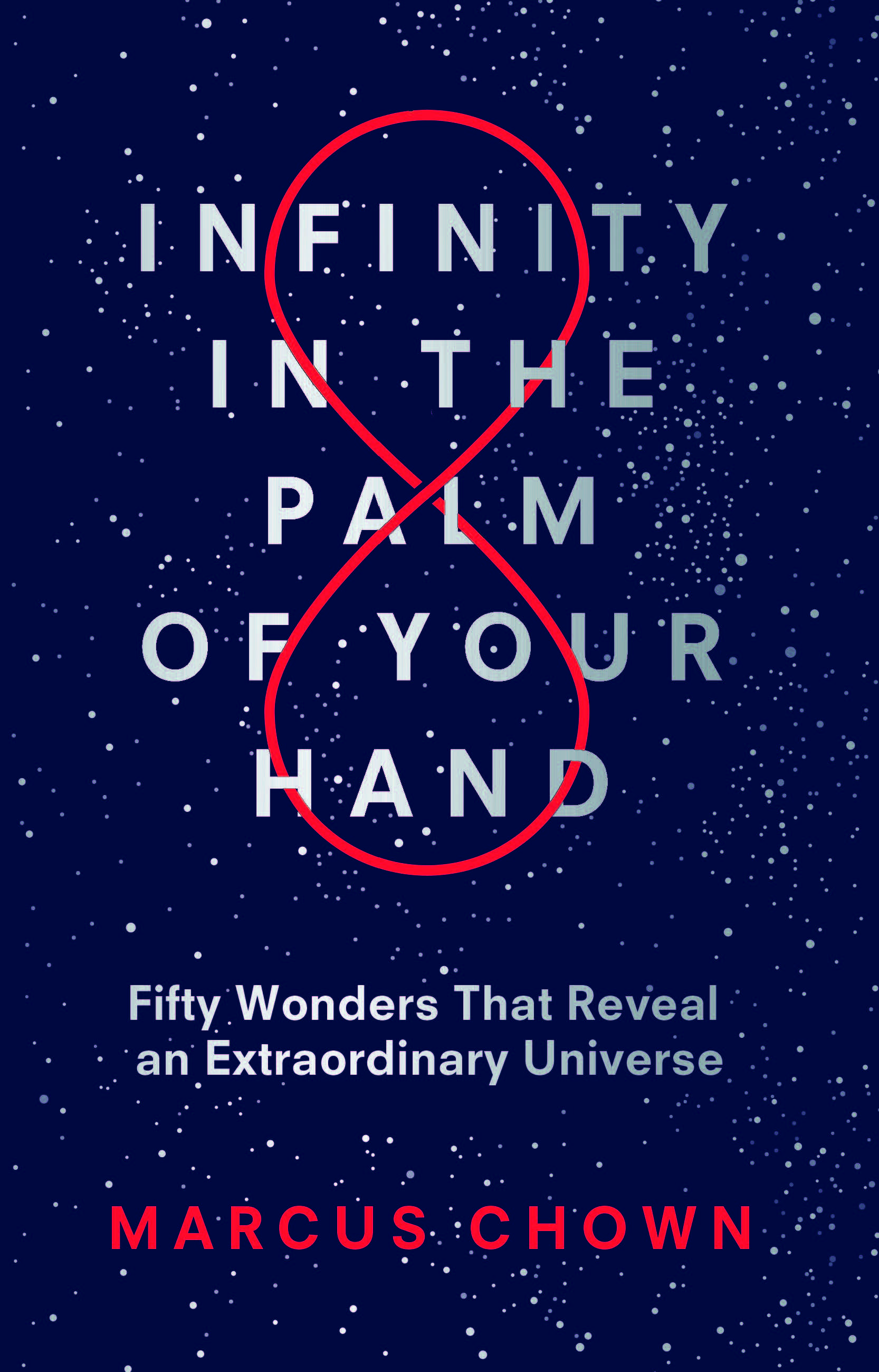 In a nutshell, the book is 50 Bonkers Things About the Universe….

Each of these is a way into explaining some thought-provoking and profound science. For instance,  the fact that, if you squeezed all the empty space out of all the people in the world, you could fit the human race in the volume of a sugar cube illustrates perfectly the mindboggling emptiness of matter. You, me, everyone – we are all pretty much ghosts. And that leads naturally on to quantum theory, the most successful but also the weirdest physical theory ever devised, which ultimately provides the explanation of why atoms are overwhelmingly made of nothingness. The fact that, if the sun were made of bananas, it would be precisely as hot as it is now leads on to the remarkable fact that the temperature of the sun has nothing whatsoever to do with what is powering it. And the fact that 95 per cent of the universe is invisible leads to, well, the extraordinary – in fact, embarrassing – realization that everything scientists have been studying these past 350 years amounts to no more than a minor constituent of the universe. And – even worse – we have pretty much no idea what the major component is!

The greatest discovery in the history of science is that there was a day without a yesterday. The Universe has not existed forever. It was born. Everything – all matter, space and even time – erupted into being 13.82 billion years ago in a titanic fireball called the big bang. How have we come to believe such a ridiculous idea? What was the big bang? What drove the big bang? And what happened before the big bang?

The Ascent of Gravity

Gravity, to steal the words of Winston Churchill, is “a riddle, wrapped in a mystery, inside an enigma”. And penetrating that enigma promises to answer the biggest questions in science: What is space? What is time? What is the Universe? And where did it all come from?

Award-winning writer Marcus Chown takes you on an unforgettable journey from the recognition of the ‘force’ of gravity in 1666 to the discovery of gravitational waves in 2015. And, as we stand on the brink of a seismic revolution in our worldview, he brings us up to speed on the greatest challenge ever to confront physics.

Two master science writers answer 140 of the biggest questions in physics, distilling the essence of each subject into tweets of 140 characters.

Marcus Chown and Govert Schilling take us on a unique tour of the universe, covering everything, from the most basic question – ‘Why is the sky dark at night?’ and ‘Why do stars twinkle?’ – to the most challenging – ‘What are quasars?’ and ‘What happened before the big bang?’.

Some of the questions in this brilliantly informative book are as surprising as the answers. ‘Is it possible that all the galaxies we see in our telescopes are nothing but an optical illusion?’. ‘Could you swim on Saturn’s moon, Titan?’. ‘Why doesn’t the Moon fall down?’ (Not a stupid question, it turns out). And ‘would Saturn float in a big enough bath of water?’.

What a Wonderful World

Why do we breathe? What is money? How does the brain work? Why did life invent sex? How does capitalism work – or not? Does time really exist? How can something invisible that comes down a wire power our civilisation? How did an advanced breed of monkey like us get to dominate the Earth? Why is there something rather than nothing?

Marcus Chown applies his deep understanding of complex things to simple questions about the workings of our everyday lives. Lucid, witty and hugely entertaining, the book explains the essence of our existence, stopping along the way to show us how babies are powered by rocket fuel, how money permits trade to time travel, why the crucial advantage humans had over Neanderthals may have been sewing and why we could all be living in a giant hologram.

If everything in our information-overloaded society has passed you by in a high-speed blur, this book will bring you quickly and painlessly up to speed on how the world of the 21st century works.

The two towering achievements of modern physics are quantum theory and Einstein’s general theory of relativity. Together, they explain virtually everything about the world we live in. But, almost a century after their advent, most people haven’t the slightest clue what either is about.

Marcus Chown, himself baffled by other attempts to explain these ideas to a wider audience, thought that there must be a better way. This book is the result. In simple language, in a book that can be read in a morning, he illuminates the two most brilliant and exhilarating ideas of the last century. 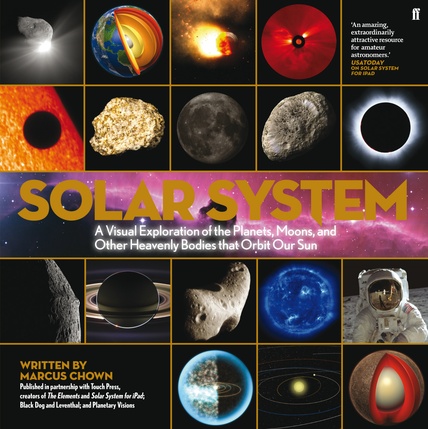 This is the book of the award-winning Solar System for iPad. Written by former CalTech astronomer, Marcus Chown, and with the very best of the 800 images of the interactive book, Solar System is an awe-inspiring introduction to our cosmic backyard.

What do you say when you wake up to find your bedroom in most terrible mess? ‘It wasn’t me, Mum, it was a Three-Headed Aldebaran Dust Devil?’ Try saying that – and see how far you get!

All Felicity Frobisher wants is a quiet life. But she’s being bullied by the school bully, her parents take no notice of her, and all of her teachers are stark-staring nuts. Now, to cap it all, she’s been befriended by Flummff, Aldebaran-4’s most badly behaved Three-Headed Aldebaran Dust Devil. Flummff can make a “wormhole” go anywhere he likes. And he uses it to get Felicity into the most awful trouble. She is food good and polite and never does anything naughty. But she gets accused of cheating in the school cross-country run, visits a terribly dusty, gritty planet halfway across the Galaxy, and accidentally sets a killer wombat loose!

We Need to Talk About Kelvin

The reflection of your face in a window tells you that the universe at its deepest level is orchestrated by chance.

The iron in a spot of blood on your finger tells you that out in space there must be a furnace at a temperature of 4.5 billion degrees.

The static on a badly tuned TV screen tells you that the universe began in a big bang.

In fact, your very existence tells you this may not be the only universe but merely one among an infinity of others, stacked like the pages of a never-ending book.

With the aid of a falling leaf, or a rose, or a starry night sky, Marcus Chown shows how familiar features of the world reveal profound truths about the ultimate nature of the Universe.

The Never-Ending Days of Being Dead

Where did we come from, and what the hell are we doing here?
Is Elvis alive and kicking in another space domain?
What’s beyond the edge of the Universe?
Did aliens build the stars?
Can we live forever?
Acclaimed popular science writer Marcus Chown takes us to the frontier of science, revealing that the questions asked by today’s most daring and imaginative scientists are in fact those very ones which keep us up at night. An ambitious yet superbly readable exploration of the mysteries of the universe.

The Universe Next Door

Can time run backwards? Can we live forever? Could our universe have been created as a DIY experiment by superior beings in another universe? These questions may sound crazy but they explore the limits of our current knowledge and highlight the key issues modern scientists are wrestling to understand. As Cosmology Consultant at New Scientist, Marcus Chown often comes across ideas that leave his head spinning. In this hugely entertaining, accessible and mind-blowing book, he explores the ramifications of, as he puts it, science with the ‘wow!’ factor.

Every atom in our bodies has an extraordinary history. Our blood, our food, our books, our clothes – everything contains atoms forged in blistering furnaces deep inside stars, which were blown into space by those stars’ cataclysmic explosions and deaths. From red giants – stars so enormous they could engulf a million suns – to supernova explosions – the most violent events in the universe – the birth of every atom was marked by cosmic events on an enormous scale, against a backdrop of unimaginable heat and cold, brightness and darkness, space and time. But how did we discover the astonishing truth about our cosmic origins? The Magic Furnace is Marcus Chown’s extraordinary account of how scientists unravelled the mystery of atoms, and helped to explain the dawn of life. It is one of the greatest detective stories in the history of science. In fact, it is two puzzles intertwined, for the stars contain the key to unlocking the secret of atoms, and the atoms the solution to the secret of stars.

It’s the oldest fossil in creation… It accounts for 99.9% of all the light in the Universe … Its discoverers mistook it for the ‘glow’ of pigeon droppings (yet still carried off the Nobel prize). The discovery in 1992 of ‘cosmic ripples’ – slight variations in the temperature of radiation left over from the Big Bang – led to sensational headlines and a scramble among scientists to claim credit. ‘It’s like seeing the face of God’, declared one of the researchers. In this new and fully revised edition, Marcus Chown goes behind the hype and the hysteria to provide a clear and lively explanation of one of the biggest discoveries in modern science – and a brilliant picture of what happened next.