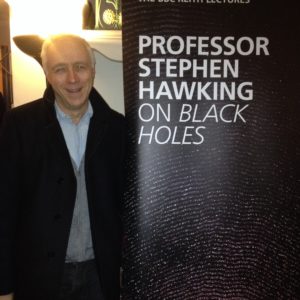 Stephen Hawking at the Royal Institution

Of stress balls and swimming with Stephen Hawking

I once went swimming with Stephen Hawking. Well, maybe that is a bit of an exaggeration. It was 1983, five years before the publication of A Brief History of Time, which catapulted Hawking to international megastardom. I was a physics graduate student at the California Institute of Technology in Pasadena. Anyone who knows the place will know it is notorious for being totally rubbish at sport – its basketball team went 500-odd game without a win. So, although it had an outdoor pool, nobody seemed to use it. Which was how one afternoon I was swimming up and down the pool on my own. It was then that I looked up and saw at the shallow end… the unmistakeable figure of Stephen Hawking. 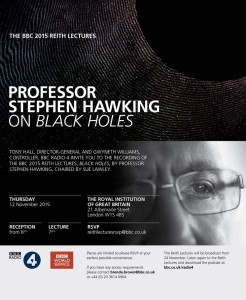 Now, even in 1983, Hawking was severely disabled. So I had never imagined he could travel far from Cambridge. But here he was, incredibly, 6000 miles from home, crumpled in his wheelchair under the hot Californian sun. What I did not realise is that he regularly visited Caltech to work with black hole theorist Kip Thorne. In fact, a few days later, I would actually hear Hawking lecture on black holes – in his own voice, though it was so slurred his graduate student had to interpret for the audience.

What Hawking was doing at an open-air pool in Southern California became clear when a little boy and a little girl came out in their swimming gear and jumped in the shallow end. I had always assumed it was his children, Lucy and Robert, but now I realise they would have been too old, though it may well have been his son Timothy, who would have been four, with a friend. 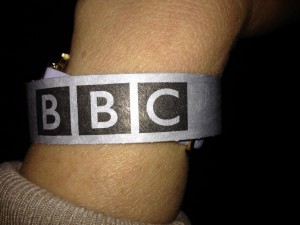 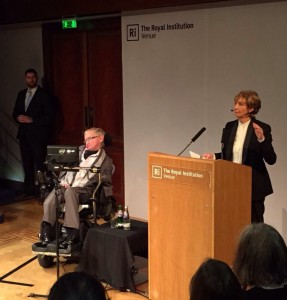 I was reminded of this incident – significant to me but, of course, utterly unnoticed by Stephen Hawking – at the Royal Institution last night when the world’s most well-known scientist gave the BBC Reith Lecture in the presence of Lucy and Robert.

The excitement was palpable. This was a piece of history. Hawking was lecturing in the very lecture theatre where the great Michael Faraday – the father of our electrical world – once held court. Apparently, 20,000 people had applied for tickets. My wife and I felt very privileged indeed to be included among the lucky 400.

The event kicked off with drinks in the Royal Institution library, its walls lined with bound journals from 1830 onwards. We got talking to a man who was absolutely passionate about “open data”, who told us that there are 360,000 bus stops in the UK – 17,000 in locations no one had expected! A bit of a contrast with the quantum intricacies of the “black hole information paradox” with which Hawking regaled us next in his inimitable computer voice. 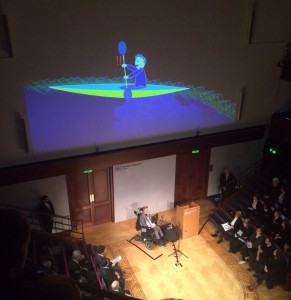 It takes Hawking a minute to assemble a single word so his talk was pre-programmed. Nevertheless, he still has to move a cursor around a screen and trigger each sentence with only the lift of an eyebrow, so there were long pauses. They were dealt with by presenter, Sue Lawley, with great professionalism. As was the audience Q&A which followed the talk.

Hawking had of course seen the questions in advance so he could prepare his answers. Asked about the difficulties he faces because of his disability, he replied that the only bad luck he had had in his life was motor neurone disease. “With everything else I have been lucky.” His daughtet told of how having a sense of humour and be able to laugh at himself was crucially important. Asked to describe her dad, the word she repeated several times was “Stubborn”.

It is impossible not to be inspired by Hawking and the triumph of his spirit. He himself has said: “However difficult life may seem there is always something you can do and succeed at.” If I moan about having a bad day again, I have told my wife that, she has permission to kick me.

I’ll finish as I started: with the (extremely) peripheral way in which my life has intersected that of Stephen Hawking. A couple of years ago, I was invited to give a public lecture at the Perimeter Institute in Waterloo, Ontario, where Hawking is a visitor – though I do not think he goes that often. Anyhow, to my delight, I was given Hawking’s office. It was empty. Apart from a blackboard covered in arcane equations and a blue stress ball the shape of a brain. All I could think was that a stress ball must be very stressful thing to a man like Stephen Hawking. 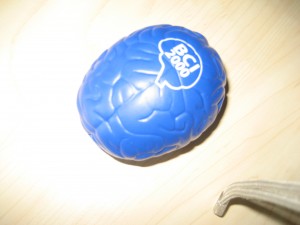