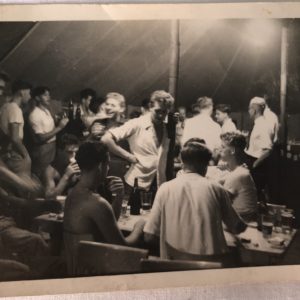 A photograph comes to light

2016: I am writing about a nineteen-year-old Indian man who, in 1930, is sitting in a deckchair on a ship travelling through the Suez Canal. Anxiety at what he will find at his destination in England is far from his mind as Subrahmanyan Chandrasekhar thumbs through textbooks, feverishly transferring numbers to his notebook. He is the first person in history to apply the new-fangled theory of quantum mechanics to dying stars and what he has discovered shocks him: if a star is above a certain mass, no force in the universe can stop gravity crushing it down to a dimensionless dot. The word for what the star will become will not be coined for almost four decades, during which time physicists will try, but fail repeatedly, to prove the impossibility of a ‘black hole’.

1972: It is the Spring meeting of the Junior Astronomical Society and my dad and I are sitting on rickety wooden chairs in Alliance Hall in Victoria, London, as a man on crutches makes his way to a lectern and clears his throat. My twelve-year-old mind is well and truly blown as Paul Murdin describes a monstrous supergiant star that is whirling around…nothing. The nothing, known as Cygnus X-1, is the first black hole ever discovered.

There is a connection – bear with me – between my being a popular science writer, my dad and the Suez Canal, although I did not realise this until last week when a photograph turned up at my mum’s… Read on

The article can also be read at https://www.rlf.org.uk/showcase/the-photograph/