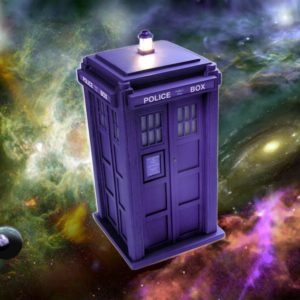 On 23 August 2014, actor Peter Capaldi started as the new Dr Who. Which prompts an obvious question: is time travel possible? The surprising answer is: nobody knows. Physicists, despite trying for almost a century to rule it out, have so far failed. The known laws of physics do not forbid time travel. In fact, they appear to make it easy – at least in principle.

Now imagine clocks which start ticking in both locations on, say, Monday. By the time it’s Friday on the Earth, it’s still only Wednesday by the black hole. If there is a way to go instantaneously from the black hole to the Earth, it is possible to travel from Friday back to Wednesday. So, is there? Remarkably, yes. Einstein’s theory permits a tunnel or short-cut through space-time. It’s called a “wormhole”.

The recipe for a time machine is therefore this: Take the Earth and a region near a black hole, and connect them with a wormhole.

But there is a snag (Isn’t there always?). Wormholes have the annoying habit of snapping shut in the merest blink of an eye. To stop this, they must be propped open by stuff with repulsive gravity – stuff that blows rather than sucks. Such material is known to exist. The expansion of the Universe is currently being speeded up by “dark energy”. This is invisible, fills all of space and has repulsive gravity. In fact, it’s the repulsive gravity that is speeding up cosmic expansion. The trouble with the dark energy, however, is that it is far too dilute and feeble to prop open a wormhole. To keep a wormhole open wide enough for, say, a person to crawl through requires material packed full of energy – equivalent to the energy pumped out by an appreciable fraction of the stars in our Galaxy during their lifetimes.

So let’s recap. The recipe for a time machine is a black hole; a wormhole; type of matter with repulsive gravity that we don’t know exists; and the energy emitted by appreciable fraction of the stars in our Milky Way during their lifetimes. Nobody said making a practical time machine was easy!

To avoid the so-called Grandfather Paradox, Stephen Hawking has proposed the Chronology Protection Conjecture. It’s really just a fancy way of saying time travel is impossible. In other words, some as-yet-unknown law of physics must intervene and prevent time travel and its associated paradoxes. Hawking’s argument is a simple observational one: “Where”, he says, “are the time travellers from the future?”

Marcus Chown is author of What A Wonderful World: Life, the Universe and Everything, Faber & Faber. It has been long-listed for the 2014 Royal Society Book Prize.